I have a question and I will not say with certainty that I know the answer. But can a Christian be faithful to their faith and have a political party loyalty?  I am starting to doubt it and I will explain why.

Beginning in the 1980s, my experience with the evangelical church had an unwritten position, that a good Christian can only be a Republican. I was too naive at the time to understand this was the game that the R 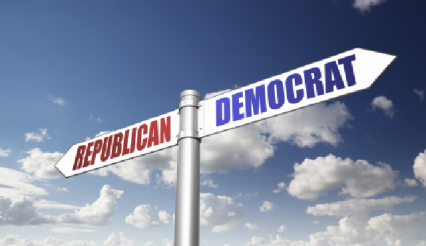 epublicans were playing (intentionally using evangelicals part of their base of power).

I was a very loyal party supporter for many years. I was so much so, I would vote straight party line in major elections by checking the party box at the top of the ballot. Then, about ten years ago, I started to have doubts about the logic behind that. This year, the theory, in my opinion, was blown clearly out of the water. So, the most anti-Christian candidate America has ever seen (when you compare Donald Trump’s life principles with Biblical principles of living) was overwhelmingly supported by American Christians simply because he was their party’s candidate (some will argue with that over-simplification but I stand by it).

But in my effort to find some space for sanity, I have aligned myself with many anti-Trump Christians. However, I am beginning to sense a deep party loyalty among them, towards the Democratic Party. So much so, that I predict that if Trump had run as a Democrat, and he easily could have, they would have voted for him. They seem to see their political savoir as not being in the right individual and right policies, but in the Democratic Party brand.

Some argue that you can align political parties with your view of Christian practice, based on the platform. The problem with this is, while at one point in history there could be some synergy between the basic Christian principles of life (which I list as simply, practicing justice, loving kindness and walking humbly with God), and a party, there would never be complete agreement. Secondly, there is platform drift. This drift happens over time and from candidate to candidate. For example, there are many great Republican presidents in history I could have supported. Look at Abraham Lincoln. He was a principled man, I do believe that his principles of doing justice and acting kindly with humility, while not perfect, were to be admired. He was a champion of freeing slaves. I think he is turning in his grave to see so much bigotry coming out of the party he once represented.

So, when we align ourselves with a party, and a drift of principles occur, it is human nature to go with the tidal drift of our party and friends than to be anchored to Christian principles. I have many evangelical friends who see me as turning my back on God because I did not support Trump. I despise Donald Trump, but if it had been a less-toxic candidate, but still one whose principles I didn’t fully embrace, I can see the temptation to follow the crowd (in this case your church or Christian friends) rather than acting independently.

Look at this passage in II Corinthians:

14 Don’t be teamed with those who do not love the Lord, for what do the people of God have in common with the people of sin? How can light live with darkness? (II Corinthians 6:14, The Message)

While, I am not trying to say each political party is evil and we must not associate with any, as one of my Mennonite friends would say, I am saying that we should question party loyalty. In any given year, I think we can support a particular party’s candidate. We can work for that candidate, give money to that candidate, and certainly vote for that candidate. We can even work within the party to avoid the drift away from Christian principles as salt and light. But I am having doubts that we can commit ourselves to one party for the long-term. So, for me at least, from this point forward I will always consider myself an independent. At the same time, I will be cheering for the Democrats, Independents, and even the Republicans who have not become Trump-conformists.