Because Dan Brown has a new book coming out, Origin, his publisher is getting him out to the media. One of those public appearances was this morning’s, CBS Sunday Morning. They had a careful interview and a walk through his personal biography.

I never knew, until this morning, where Dan Brown stood on spiritual issues. His books were opposed by many Christian leaders from the Pope to evangelicals. However, to me at least, that never tells the author’s personal story because it is fiction. An author can write a fictional view that is in direct opposition to their personal view.

However, there appears to be a consistency between the author, Mr. Brown, and his works. I suspect, from what he said in the interview, that he is an atheist, with certainty. As a matter of fact, his new book seems to look at what happens when there is no longer need for God.

But this is not a criticism of Dan Brown. I respect him as an author. This is a criticism and more of a post=mortem of what when wrong in his faith journey.  He describes an experience as a young boy of going to his Episcopalian priest and asking him (my paraphrase), “I am learning at church that God created the earth in six days. However, in school I am learning about evolution, which takes much longer. Which one is true?”

He reports that the priest said, “Good boys don’t ask such questio 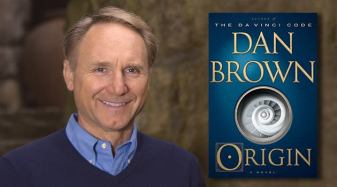 That was the beginning  of his departure from his Christian faith and his turn to a more cynical (and lucrative I must add) path of raising doubts about the Church.

My grief is directed at the lost opportunity. How tragic that a young man could be asked such an important question to his priest and was given the worst possible answer he could have given.

The second point that I want to make, is that Dan Brown talked about his father being an accomplished mathematician and teacher at a prep school. Being raised in a family of math (and music) was another factor in his doubts. It is my view that math, music, and art are the greatest apologetic of God being there, yet if not seen in that light, it can be misused. It was another sad failure in his upbringing. It is a little like using the profound order of a garden to prove that there is no gardner.

But again, this is not a criticism of Dan, but of us who continue to miss these opportunities.

One thought on “Dan Brown, a Tragedy of the Faith”