Some people would say that it is wrong to bring up hard issues when a terrible event has happened. I disagree. When a relative event happens, it is the ideal time to start the discussion. For example, there is no better time to talk about gun laws than now. Yes, there are a lot of emotions, which can get in the way, when you are in the aftermath of a terrible event. But there is also a kind of clarity that appears in times of crises.

I was about to do a post on House Majority Whip Steve Scalise before the awful events of Las Vegas. As you know Scalise returned to work at Congress last week after a tragic shooting, which almost took his life. I heard him and some of his colleagues make statements about God, which caught my attention. 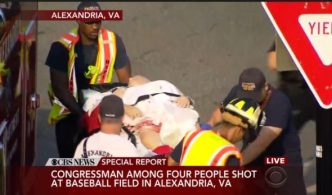 Sometimes I think that I am not a good fit within standard Christianity because I don’t follow the norms. I don’t have many Christian friends anymore, because I am often offensive to them and they fear that I am unorthodox (see my previous post about unorthordoxophobia). But I do not accept the traditional answers when they make no sense. I am even considering starting a new blog under the simple name, A Bad Christian. I thought it would be better to be up front that I will appear to be a bad Christian by the things I say.

But I do want to raise real questions. I raise these questions, not to be a troublemaker, but because I believe if you only give sweet answers to tough questions, in the end it will come back to haunt you. That’s what happened to me.

So, back to the question in hand. Congressman Scalise was every emotional upon his return, which is to be expected. He made the comment that he felt the presence of God on that baseball field when the shooting broke out (see here). He pointed out that one of the congressmen there that day of the shooting, the one who helped him, was a “Combat Surgeon” Rep. Brad Wenstrup from Ohio.  He praised God for His goodness of working that out.

From what I understand, Rep. Wenstrup is a podiatrist (foot doctor / surgeon) who did, indeed, spend time in Iraq. But to call him a “combat surgeon” is a gross overstatement. This is not to say that Rep. Wenstrup, due to his medical training, did know how to stop bleeding, which was very helpful.

So, while it is soothing to the evangelical to be praising God for saving the life of Rep: Scalise I think it does a great dis-service. Now, such stories of miracles and God’s goodness in Las Vegas. The intent is to give God glory. But let’s think about this, taking the “answers” to their ultimate metaphysical conclusion.

It takes a lot of effort and energy, speaking metaphysically, to put a “combat surgeon” at a particular place at a particular time. The statements are that is exactly what God did on the day of the shooting in Washington. However, it would have taken much less effort on a divine being’s part to cause a firing pin of a rifle to mis-fire. It would have been much, much easier for God to have caused James T. Hodgkinson, the shooter, to have had a flat tire on the way there or a heart attack. You could move a few brain cells in his brain to interfere with his intention. By preventing the shooting, you could have prevented a lot of suffering. I will not get into the Las Vegas stories (because there are so many of them that are flooding in right now).

So, why didn’t God do the lessor effort, metaphysically? It makes no sense. This kind of god is careless, lazy, dumb, or just impotent.

The evangelical would step in at this point and say that all of this was God’s will. But then, we have created a god that is much less than the real God. It is a god on par with the Greeks (and I think that many Christians get their model of God from the Greeks rather than scripture).

So how do we handle bad things? Is God asleep at the wheel? Is God there. Is God too weak to stop bad things?

The answer has to be that it is beyond our understanding. It is a mystery. But God cannot be the source of  evil. God cannot create some madman to kill our families in order to teach us something. God cannot standby when His hands in His pockets not knowing what to do except to supply a foot-doctor. If God is as powerful as we say, then God has created a world which is real. It is a world with consequences. It is a world with real evil. If God stop the consequences of evil, then would it be evil?

I am a Presbyterian and do believe in a God who is above destiny and fate. But He is also a God that allows history to take its course, with a fix in the end. But to make up superficial sweet stories of how God saved my friend in Las Vegas, but ignored the 59 other good people who were killed, will not make sense in the end and this kind of god will eventually be extraneous.

One thought on “Where is God When There is a Tragedy? An Alternative View”