We all have or had friends who are evangelical and adore Donald Trump, and I mean, sincerely adore the man. Every word that reels from his gold-plated tongue is not just truth to them, but somehow, it is God’s truth. I know, for most of us, we cannot explain this paradox, short of thinking that they must have fallen under the same spell as the Jim Jones adorers, or the scarce Jews who loved Hitler. They must have read a different Bible or lived within a alternative reality. It must be defined in terms of mental illness and brainwashing. They follow the tweets of the pied piper’s pipe as if under an irresistible hex. 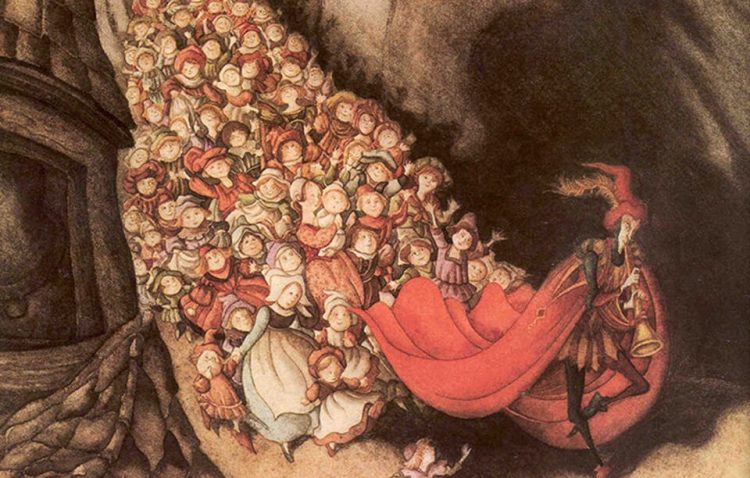 But there are those, evangelical friends, who seem more rational, at least on the surface. These friends readily admit that Donald Trump is a liar, a deceiver, a womanizer, thief, and narcissistic-hate monger. They don’t actually like him, yet, they voted for him. They voted for him because of the supreme court appointments up for grab. They were looking ahead to Kennedy’s retirement. They felt like that potential justified the vote for the Fiend (as in monster or devil). It was a wager that Donald Trump will eventually go down into the trash-bin of history, and that does not matter. But his Supreme Court of the United States (SCOTUS) appointees will change America in a big way, “bringing it back to God and God’s laws.” This maneuver was more than just “dining with the devil,” it was paying high stakes poker with him.

I remember when I was an evangelical that we were told that the SCOTUS was more important than the office of the president.  We believed the narrative that it was the liberal elites—whoever they were—who controlled the makeup of the SCOTUS. Additionally, we heard from our pulpits, that the SCOTUS didn’t follow the constitution anymore, which our evangelical forefathers, such as Thomas Jefferson (wink, wink) had written. But now, though a “relative truth” rewrote the constitution by their interpretations. Therefore, the weight of the presidency was determined by his or her ability to appoint to the SCOTUS.

In 2016 these evangelicals saw the writing on the wall. The polls told them that Trump’s pseudo-populism was going to usher him into the Oval Office. They hitched their broken wagon to his ersatz star.

For those evangelical friends, they have a worldview that America was Christian, then has slowly slid away into Satan’s domain because of the changes the liberal elite minority have imposed on us. That the majority would turn us back to God, if they had the chance. But even if they weren’t the majority anymore, the Christian minority must support and impose America’s Christian values on the majority as if it were a theocracy.

I haven’t spoken to those “moderate” evangelicals in a while, but I expect that they are now gloating in their vindication. They must feel even more confident that they did the right thing by putting Trump into office. In their minds, the litmus test of turning America back to God is making abortion and gay marriage illegal again. But this great wager has come at what cost?

There is no much to deconstruct with this narrative, it is hard to know where to begin. But it is a circular reasoning. To protect an honest, infallible truth Vs a relative truth, they have supported the greatest public proponent of relative truth that American has ever known. That advocation of falsehood is not born of some great and well thought out philosophical conviction by Donald Trump, but of a deep character flaw of mythomania. Yet, the tolerance of that falsehood is surprisingly high, and probably so from the influence of moral relativism that has gripped our western culture over the past 100 years. In other words, I think Donald Trump would have been run out of Washington on a rail in the 1800s because we did have a conviction of absolute truth then.

Then we must move to the particulars. Those Trump despising—but supporting—evangelicals justify their support for him because of the potential of reversing Roe V Wade and Obergefell v. Hodges (the case the ushered in the allowance of gay marriage in all 50 states).

First, you cannot legislate a moral conviction on a culture that does not hold those convictions. It simply cannot work. The majority of Americans support the right for a woman to choose and gays to marry. Beyond that, we must look at the merit of the positions themselves, from a Christian perspective.

A true pro-life stance, the pro-life of a Biblical nature, supports all of life. It supports the life of all human beings at all stages in life. It supports the life of all living things. It supports the quality of life, which is often a product of social justice. To limit it to the viability of a fetus is a grotesque distortion in the definition of life. This notion makes no moral sense (to ignore life in all other circumstances except for a fetus) that it has to be the product of some great political mischief… and it was. “Prolife,” was a deliberate branding by the Republican Party, as an attempt to bait and seduce the evangelical vote.

It is beyond the scope of this short article to address the gay marriage issue from an authentic Christian perspective, but others have. But I will give it a simple framework for discussion.

Imagine that the language of Paul, in his letters, and in Sodom and Gomorrah, Genesis is clear (and it is not) that homosexuality is not of God’s plan for humans. Why then does the evangelical single out that one “sin” while ignoring all the others? Things like stealing, adultery, fornication, deceit, lying and the worst sin of all, hate? We are all guilty of those things on a daily basis. There’s some psychological mischief going on here as well, within the evangelical’s mind. But you can debate the scriptural support for those positions and  I will not do that here. But the psychological motivation for the gay-hating Christians, is clear.

But in conclusion, those Trump-despising but supporting Christians have strained a gnat and swallowed a camel. Look at these verses (Matthew 23:23-24) in the Message:

23-24 “You’re hopeless, you religion scholars and Pharisees! Frauds! You keep meticulous account books, tithing on every nickel and dime you get, but on the meat of God’s Law, things like fairness and compassion and commitment—the absolute basics!—you carelessly take it or leave it. Careful bookkeeping is commendable, but the basics are required. Do you have any idea how silly you look, writing a life story that’s wrong from start to finish, nitpicking over commas and semicolons?

This is the message to those who find the Trump’s SCOTUS appointment is an end, for which a horrible means ahs been justified. It is morally ridiculous. The only thing that is required is a severe repentance. (I must go but will try to get back to proof-read this tomorrow, please ignore any typos).

3 thoughts on “Judge Kennedy and The Wager with the Fiend”