If I were God, and I’m not, I would have done things quite differently. I would have created people in the life pattern of the fictitious Benjamin Button. We would come into this world as an adult-sized, wrinkled ball of swiveled up flesh, hardly recognizable… but when identified, seen as a hideous form, barely human. Our new-born minds, while not lacking information, would have processes that had slowed and tangled, representing equally snarled cerebral neurons.

Our new-born selves would almost devoid of normal senses, hearing, sight, smell, and taste. Our joints would be frozen as old, rusty iron hinges, which had been left out in the rain. Our bones would be racked in pain with any movement… or sometimes without any movement at all. We would be completely dependent on others, which would be the one thing we shared with the present system of being born as a helpless baby. Yet, our size would compound our dependency. Few would want this task so they would leave it to the unattached professional.

Like our bodies, our psyche would bear the scars of malignant disappointments, betrayals, and abuse. It would be a sad state of being.

But then, with the passage of time, (which would past faster in the newborn-old age, and slow down as we moved through life), hints of being better would come. One morning, the light starts to shine a little brighter and deeper into our cataracted and

degenerative eyes. Over weeks and months, the pitches of sounds, which we could not hear upon our birth, become noticeable and eventually focused out of meaningless noise into syntax and evocative substance.

One morning, as our caregiver tries to get us into a chair, a frozen knee, which had snared us into the fetal position, gives a bit. The leg extends 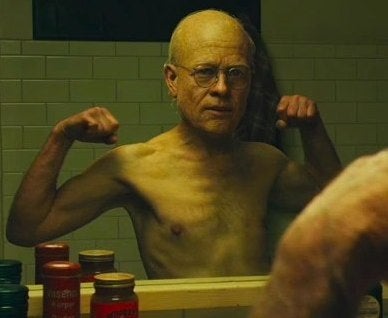 a few degrees, allowing us to bear some of our own weight as we stood to pivot to our wheeled chair.

Over the months, and into our second year, we notice a subtle change within the web of neurons inside our heads. Thoughts, which were too complex for us before, start to settle into a rhythm of order in which we can make some sense. While our heads came, preloaded with life-experiences, but at first our feeble minds couldn’t organize them. However, with time, we start to have the clarity to draw from them.

With the passage of more time, there seems to have been a magical machinists’ oil that has started to penetrate our joints. We are becoming more mobile with extensions, retractions, and rotations. It is insidious at first, but no question a real change.

With a subsequent few years, we notice that congenital pain within our bones has dissipated by more than half. The senses have improved by the same. We are speaking in coherent sentences and can stand and walk, although not far. Yet, with even short jaunts, we become breathless.

As the physical ailments continue to heal and improve, so do our psychological and social ills. We start to see, coming, the first (or is it the last?) of our great life disappointments. As we approach it, that chronic pain in our soul crescendos to an unbearable flashpoint of grief and despair. Then suddenly it is gone. There’s no memory of it. It has left the world. There is no remaining trace for, within this reversing world, it now has never happened. In the distant other disappointments appear, grow and then vanish in the same way. One by one our hearts become purer, more tender, and unweighted.

As our bodies continue to strengthen and heal, so do our relationships. The loneliness, in which we entered this world, starts to find voices again. The dead are coming back into our lives, all of them. Those relationships that had drifted apart as a product of time in this world, were converging again, becoming richer and cohesive. All those friends and family that become estranged due to our hurts, divergent opinions, and dreams, start to coalesce once more, around shared values. The table is becoming fuller and there are pictures of living people on the walls again.

As the years pass our strength is gained as is our breath. Our senses become acute and our minds well-oiled. This eternal hope springs from our soul, a hope for running faster, lifting heavier things and having more endurance by the simple passing of time.

We can eat cake again, without guilt.

The four winds, which came in through our windows and doors and carried our children off to the ends of the earth, has changed direction. Before long one child reappears and then another, and then another. Soon the house is full of noise, chaos and dirty dishes. But we now have the energy to keep up. We have the patience to constantly pick up Legos, offer protection, listen to all their stories, and to play. The knees no longer hurt to stoop to their level.

In this world, I would do things differently. I would have agreed to less office and church meetings, that usually went nowhere except deeper into the night, and I was to them but a warm body. Instead, I would have stayed home more with my kids, for whom I was everything. I would have played more. I would have held the sleeping child on my lap for the entire night, rather than taking them to their beds. Even if it meant a sleepless night for me, I would just watch them breathe, feel their heartbeat, watch their lips move as they lick that ice cream in their dreams. I would protect them throughout the night with my life.

To make sense of doing things differently, I offer one aberration to this new narrative. While Benjamin would have become less knowledgeable with the passage of time, in the world I would create, the knowledge would remain steadfast as we grew younger. The wisdom, which we had gleaned from a lifetime of experiences, would somehow persist, despite the un-experiencing of each event. We would now know to love everyone deeply, but not to fully trust anyone, especially ourselves. To forgive more. We would remember those wonderful people who are different from us, who live in exotic places, believe in different gods and have different customs. We would not fear them, even after unmeeting them.

During the reversal path, we would see the outcomes of everything and then the silliness of the anxiety that preceded it. Even when the outcomes were far worse than our anticipations, the worry was of no help in the end, or in this case, the beginning.

When we enter that world of our youth, when time really slows down, we would feel the overwhelming vigor in our bodies. We would want to run to see how close we could come to a 4-minute mile, not to see if we could make a mile without a heart attack. Our muscles would increase without trying. Our energy would seem limitless. The barber would be saying, “Your hair is fuller and darker this year.” Yet, this time, the old-life wisdom would protect us from the dumb mistakes. We would once again feel safe, the protection of a father and mother who we thought could keep the world away if needed.

We could eat deserts with every meal, and candy in between.

As we entered the last years of our life, we would be small, easy to care for and surrounded by a crowd of people waiting to take their turn. We would be loved. We would be adorable.

If I were God, and I’m not, this is how I would have done it.