Okay, the reason I’m writing so soon isn’t that I have major news to report, but in response to a question I have been asked many times in the past few days. The question is not asked in the form the title here reflects, but usually more like, “Mike, you’re going to beat this thing, aren’t you?”

Now I realize that most of the people who ask this question, do so with the best intentions. They really want me to beat this thing and their question is like them cheering me on. Sometimes it is because they want factual information (for their own reassurance that I will get well again). A few people ask this question simply because they don’t know what else to say and are just making small talk (and are not really interested in explanations).

Then there are those people who come here, like my children and other family members, who are afraid to ask this question, but are really wanting to know.

I can never explain my situation, accurately, in one or two sentences while standing in line at a coffee shop or in a church vestibule. I can never judge how serious the person asking the question really is, so I don’t know how much to say.

I will try to accurately answer that question here. If you are interested in details, continue reading because there will be many. As I mentioned, it is a complex story without a clear answer. The other issue, and I’m serous, is that I just started a new round of chemotherapy and I’m very high on steroids ( and it is after midnight and I’m exhausted after a busy day but don’t feel like sleeping). I’ve talked Denise’s ear off today (I think she was about to sink to the bottom of the hot tub to escape me). I may have the tendency to be long-fingered (like long-winded is to talking) as I type.

First a caveat. I have read almost every study published on Multiple Myeloma (MM), Renal failure associated with MM, and treatment outcomes. I’m sure I’ve missed a few (that I keep discovering) but not many. The blaring thing that is missing is a consensus on survivability of MM and specifically, MM with associated renal failure.

Another couple of points that I must repeat again are, 1) MM has no cure. No person in the world has been recorded as being cured by medical science or any kind of miracle, 3) MM is really at least five very different types of cancer and outcomes are determined on which type you have, and 3) I do not know if my kidney function will ever come back to the point that I will not need dialysis and this may have a bearing on what treatments are offered and outcome.

I first found figures in places like the American Cancer Society, which were very disheartening. They place my survival ability as 8 months to 3 years. I accepted these numbers at first, but with further reading, it became clear that these numbers were based on the state of treatment about 10-20 years ago. The treatment of all cancers is advancing rapidly, more-so for MM. Just in 2017 they thought they had a cure (CAR-T) for MM. But then, at the two-year mark past treatment, the majority reverted back to cancer. Since then, there have been about ten new treatments that have either made it to the market or are in pre-marketing clinical trials.

To know if something is really successful, or even a cure, it takes at least a decade of observation to figure this out. Most of these treatments have been out of the lab and into treatment for only 2-3 years. Also, we are understanding MM much better and why it eventually outsmarts treatments. Adjustments are being made to future treatment concepts based on what has been learned.

With this said, what do we know? Acting like a TV show cutting away to a commercial, I must first break away and talk about my renal failure, because it plays a role in my survivability.

I don’t know if I have ever prayed for anything as much as for my kidneys to return. Again, as it can be confusing, I will explain that I do not have cancer in my kidneys and my MM has not “metastasized” to my kidneys, but the protein produced my MM has plugged up my kidneys.

I do have some new data as of today. I will explain (as graphed below) my kidneys had a gradual improvement but have plateaued over the past 3 weeks. If my tears could have brought my kidneys back, they would be in excellent shape. This graph (as shared last time but expanded with today’s numbers) shows how much one toxin, creatinine, accumulates in my blood per hour. It MUST be zero for me to get off dialysis. What today’s numbers do not reflex is that another toxin, called BUN, did drop by 10 points. 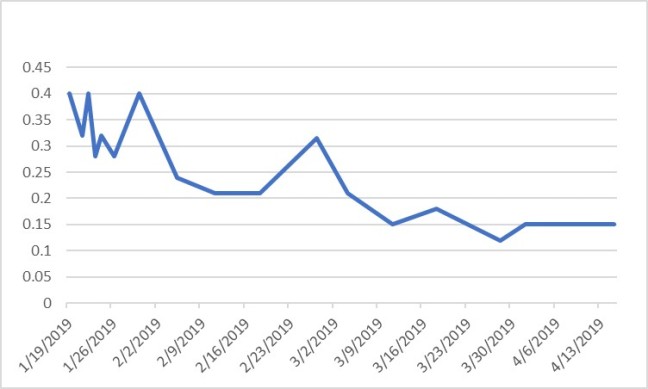 There’s more caveats and I will list them as bullet statements to speed up this writing:

I must talk about the two treatment pathways. One is continuing chemotherapy for the rest of my life. The other is doing the SCT, using my own-harvested stem cells. Some people, with my particular MM, choose not to do SCT for a variety of reasons (for one it is dangerous, where almost 5% do not survive the treatment, as my own brother almost died form it a few weeks ago). The main takeaway from the many studies I’ve read (and there is not a consensus) having a SCT may double your life expectancy.

I have chosen to pursue SCT for one main reason. If I don’t, I will have—on average—3.5 years to live. There will not be a cure on the market by then. If I can live—on average—7 years, there will most likely be a cure. If I survive until a cure is available, it is even possible, that I could get off all my drugs and return to an almost normal life.

First, I must be approved by the transplant team. Some will not accept those on dialysis. The earlier you do SCT, the better it works. The protocol is 4 rounds of chemo, then transplant. My referral to the SCT team at U of Washington has been lost for a month. This is very frustrating. I just started my 5th round of chemo because of this error. I called U of Washington today (and getting voice mails) trying to find out where the hell my referral went. I don’t think it ever left Anacortes.

This study graph below, sums up this whole post. However, I will have to explain. On the graph on the left (marked PFS) shows how many years a SCT patient will be symptom free (doesn’t count for symptoms from renal failure like I have) for three different groups, based on the initial response to the treatment (the best predictive factor). The blue line is for patients who obtain complete remission (no evidence of cancer) right away from the SCT. The red line represents those who have a partial remission from SCT. I have had a partial remission now from my chemo (however my chemo will eventually fail and sooner than SCT). The gold line is for those who have had a minimal or no response.

The second graph (marked OS) shows years of survival, using the same color code. This study was completed in 2011. I have yet to find a good study that is more recent than that, but maybe my transplant team will have newer data. But you see, these numbers look much better than those quoted by the antedated American Cancer Society numbers. I’m glad I know how to read studies. This gives me some hope. So, if 37% live 20 years, that puts me past the normal life expectancy. But some die before 1 year after SCT. I know of patients who died during SCT and some who have died within a couple of months.

Last Thoughts: The biggest risks for my life being cut very short is an unexpected complication (because the chemo suppresses our immune system so much, I have known several patients in my online support group who have died from pneumonia) and, to be honest, I have had some thoughts of ending my own life. Not now, but if my day to day symptoms get worse. I have the constant neurological symptoms (although for some reason only God knows, were minimal today) and the three weeks per month that I’m doing chemo I feel like I have a very bad stomach flu. It is hard to function, and I get very discouraged. Being tethered to a dialysis machine doesn’t help matters.

I am sorry again for any typos. It is 1 AM and I’ve had a very rough day with me trying to see patients for the morning and doing chemo at the same time. The plan was to be home by 1 PM to rest but due to more things to do at work than I expected and then having car trouble (I left the lights on in my new sports car this morning and spent a hour trying to figure out how to get to the battery, which to my shock was beneath the trunk with the spare tire). I have to get up in a few hours to drive to Oak Harbor to endure another dialysis session.  Mike

3 thoughts on “RAMBLING/UPDATE: How Long am I Going to Live? (The unabridged Version)”