I certainly don’t have a corner on suffering. If I bring anything to the suffering table, it is that I’m a novice. Before now, I’ve had a pretty good life, a life devoid of much suffering. Maybe that’s why it has taken me by surprise and I’m still trying to sort out how to live with it, without too much self-pity and the accompanying depression. I have been blessed to have family, friends, and even strangers who voice empathy if not compassion.

Since I’ve been ill, I have had countless people come up and tell me their own stories. Stories of when they, years ago, had cancer and came close to death with great suffering. For others, it is stories of how they have suffered from pain or other symptoms their entire lives. We really do live in a broken-fallen world. It could be pain from their backs or suffering from Crohn’s Disease or who knows what. At least in my relationship with them, they have suffered in silence. I hope the reason they hadn’t told me this before isn’t because they thought I would not have cared.

Pity has negative connotation. I’ve heard many lines in movies or books where someone says, “I don’t want your damn pity!” In this past couple of weeks I’ve been thinking about the difference between pity, a negative term in our thoughts, and empathy, a positive term.

I hope, in my line of work in chronic head and face pain, that I had empathy and compassion. I think I did. I could deeply imagine my patients’s pain to the point, I felt like I could feel it too. I did, with all my heart, want to relieve such pain. . . if it were within my power to do so. 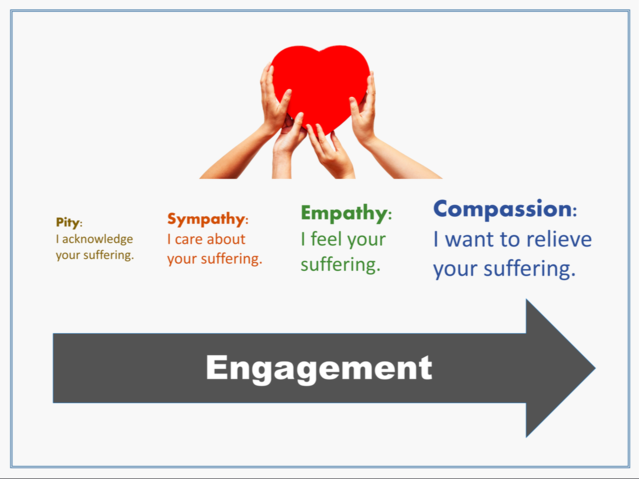 In these days, and I don’t want to be too candid because it is a small world, I sometimes feel (and this could easily be my wrong interpretation) that my medical providers have none of the above. Because the treatments have failed, I feel like my appearance in their clinics is a source of great dread for them, as if this is somehow my fault (and of course it is not). If I voice my symptoms, it seems to frustrate them even more so I’ve decided to not bring up how I’m feeling  anymore. I did not, thank goodness, have this feeling at the Cancer Care Alliance in Seattle last summer and I will be seeing them next week for a follow up, where I hope to vent all my sources of suffering to a listening ear.

But as I thought about this, I realize that I really do desire pity. . . and that’s all. I don’t expect anything more than the simply acknowledgement of suffering and the understanding that I’ve done everything humanly possible to avoid it. That makes one feel so much better than a denial–or worse, the blame–of suffering.

If I ever survive this and am at least out in the the social world, if not back to work seeing patients, I hope that I carry with me a tremendous desire to listen to other people’s suffering and to acknowledge it and to try to go beyond that to real empathy, and when possible, real compassion (as defined above). I realize now that I had failed at this often and I am sorry that I have not afforded the opportunity for others to confide their suffering with me. I need to do a much better job of this, and that is my lesson from all of this.  Mike

6 thoughts on “RAMBLINGS: For Pity’s Sake”