Honestly, I had never heard of this particular conspiracy network until this week. Yes, I had heard about the ridiculous “Pizza-gate” story, which some of my evangelical friends and family had sent me (presenting it as the truth) just prior to the 2016 election. They wanted to show me how Hillary was the devil… I suppose. I had also heard about the Seth Rich (see here) conspiracy stories, where, rather than a random act of murder, he was supposedly killed by the DNC to cover something up. God bless his parents for having to live through his death and then the nut jobs who wanted to capitalize on his most unfortunate circumstances. Then there was the Sandy Hook “staged” slaughter. That last one really breaks my heart.

I first noticed the Q or QAnon shirts and signs in the crowd at the Trump rally in Tampa. I didn’t know what it was about, but I was quite curious. I read about it on Wikipedia that night (see here). Since then, several news organizations have done stories to explain it.

I joked about this at first, thinking how nutty or gullible you would have to be to believe in something like that. I was thinking about the characters, Lloyd and Harry, from the movie, Dumb and Dumber. 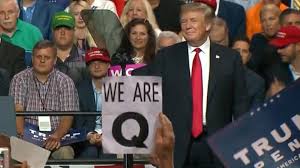 But then I started to think about a conversation I had with a patient of mine. She told me the story about her son, a driver for Federal Express. He was delivering a package to the Alfred P. Murrah Federal Building in Oklahoma on April 19th, 1995. What terrible luck, as he was in the building when it was destroyed by Timothy McVeigh’s horrible bomb. He was in his early thirties (if I remember the details correctly) and had two kids. His head was blown off. Nonetheless, on that day, 168 people (many children themselves) died a horrible death.

The year I was talking to this man’s mother was about 1998, so the wound was still fresh in her soul. She told me how she started to study Timothy McVeigh’s life (see here), just to try and make sense of all of this evil. There was no making sense of it. But she did learn a lot about the man. He was taken with right-wing, white supremacists ideology and several conspiracy theories, including those very much like QAnon. Those try to suggest that there is this hidden (or deep state) government that is evil and trying to control our lives. The evangelical followers, of course, try to tie this to the Eschatology of Hal Lindsey.

I mentioned to that lady that day that I was currently (in 1998) in a big dispute with my kid’s youth pastor at our church in Stewartville, Minnesota. This youth pastor was passing out copies of a poorly written conspiracy book to the kids, written by one of his friends. That book told stories about black helicopters watching us and taking Christians to internment camps. It also told how the Clintons being the anti-Christ. and connecting it to Y-2K. If I remember right, this deep state was hauling off the Christians in secret to be executed, or something like that (I’ve heard so many of these crazy stories that I can’t keep them straight). I was totally livid!  I called the senior pastor late at night to voice my outrage, and tried to pull my kids from that church (they were old enough to dive and make their own choices). Some parents thought I had been blinded by liberalism, not seeing what was going and the end was really near. I wanted to vomit.

When I shared that information with this woman–and later regretted doing so–she was move to a state of panic-laced tears. “You must stop them!” She said. “This is how all this evil started … with stupid, silly lies!”

I am nonpartisan. I have heard conspiracy stories coming from the left as well (embellishments of the Tump crime family, as if it needed embellishments). My dream is not that everyone would be a Democrat. My dream is that everyone would know the truth and that truth would set them free to love others. I am trusting the Democrats to save this country in this time of history, but they too must watch their souls that they don’t become “party first” as the Republicans have.

Reflecting on this, I am now deeply concerned about this QAnon group. It is evil. It will lead to violence… it always does. God help us. We need to be like this poor mother, taking these things seriously, very seriously.

(sorry about any typos, I did not have time to proof-read)

One thought on “Why QAnon Matters”