I have been listening to as many novels as I can on my Iphone. Usually, such listing comes as a mental distraction to the physical pain I suffer when I put my body through that (self flagellation) religious ritual of jogging.

I’ve listened to some horrible books, which have experienced great success. I call them the Cheetos of novels. It looks like food,  but, it is just air and flavoring. These are usually these authors that pump out two books a year, sometimes with ghost writers helping.  They are word mills. It is just about the money. They can cobble together a story on a whim.

But then you stumble on the caviar or rhubarb pie with ice cream of reading. These are the authors that I had not known before, but who write as immortals or angels with super-human abilities to understand and to craft language.

I am a little more than halfway through Geraldine Brooks’ Caleb’s Crossing. She, like Joan Didion, was a recipient of a Pulitzer Prize for her writing. Having experienced these two writers back to back (with a little of Edgar Allan Poe squeezed in between) has given me great appreciation for the prize. They know how to pick them.

The amazing thing for Caleb’s Crossing is not just that the writing is so poetic, but it is in a seventeenth Puritan English style.  I can’t imagine the research that it took for her to prepare for this. It is more than chewing gum and walking. It is like doing a masterpiece watercolor while walking a tightrope over a bed of hot coals. She does so well. I will demonstrate with a few words from my evening jog. 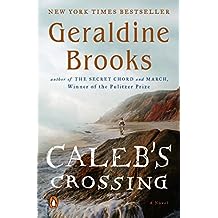 (a dialog between Caleb, a native young man who has taken on the white man’s ways) and his secrete close friend, Bethia (the 17 year-old protagonist, who Caleb has named Storm Eyes). This is after her father has told her that she will work as an endured servant at the college (in Boston) to pay her brother’s way thought school.

“Do not let them make a slave of you Storm Eyes.”

I stepped back, surprised by his sudden wrath.

“I thought your grandfather honorable.” He turned and spat on the sand. I winced.

“He is honorable, Caleb. You must not–“

“Must not! I am full up to my throat with ‘must not.’ You English palisade yourselves up behind ‘must nots,’ and I commence to think it is a barren fortress in which you wall yourselves.”