I was going to wait until tomorrow to do an update, but I’m doing this one now to solicit prayer. Tomorrow will be a big day. I go to the lab early and get my comprehensive labs drawn. Those labs are the first done in two weeks and will tell me how I have done on 1/2 normal dialysis for the past two weeks. Those labs will also tell us how the chemotherapy is working, although that part won’t be back for several days.

After the labs, I will go to work for a couple of hours and then meet with my nephrologist.  I have not seen him in six weeks. The last contact I’ve had with him was when he called me two weeks ago saying it was time to kick me off of dialysis. I was shocked. Of course I want to get off, but my lab tests have not supported ending it. My kidney function is about 1/3 normal ( estimated GFR of 17-25 and normal is >60 ). The studies I’ve seen says you don’t try to kick someone off dialysis until they are at 50% of normal. But I trust the nephrologist. Maybe my labs will be better in the morning.

As I have said before, it would be huge if I would get off dialysis. Again, it is not just the inconvenience of it, but not being on dialysis would greatly enhance my ability to fight the cancer. My oncologist has suggested that they may not do a stem-cell transplant if I’m on dialysis and a stem-cell transplant is the only hope for beating this cancer, and that is only for a few years. So, I cannot over-estimate how much is riding on the conversation in the morning. 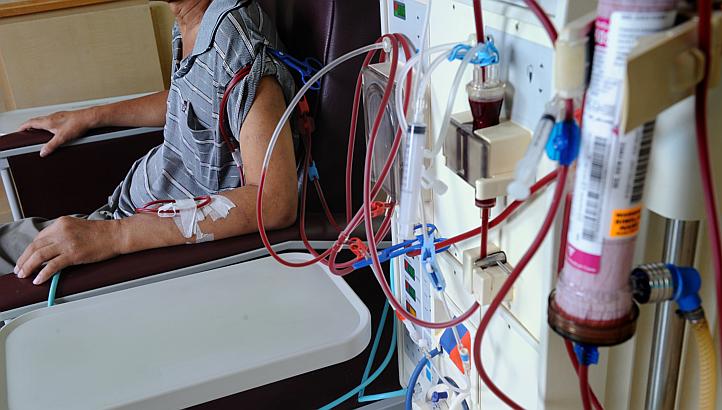 It has been a discouraging time of late and some good news would be greatly appreciated. The discouragement has come from severe reactions during my last two weeks of chemotherapy. I just completed my third round and it seems with each round the side effects are getting worse. Each week I have three chemo drugs on Monday. Those go well. Then I have drug # 1 in a second dose on Thursday. Each of the past two week, Thursday night through Saturday have been hell, with a partial recovery by Sunday. It is like the flu from hell with total body pain, chills and explosive diarrhea. But one of the most discouraging things is that this terrible sickness ushers back in the constellation of bad neurological symptoms that I had when I was first diagnosed with renal failure and my toxins were sky-high. I felt this week that I’ve made no progress.

This coming week will be a break from Chemotherapy and my hope is that I can recover . . . and that I learn that I can end dialysis. That would lift our spirits.