It is a topic that most of us visit, although tangentially, now and then. When you are young, it is hard to even imagine what your last day on earth would look like. As you reach middle age, you see that day with a bit more clarity, but it is still not a subject of something on which you want to dwell.

When I was in my twenties, I sometimes had the sense that I would die in a type of glorious end; maybe a bullet, an explosion, a fall from a cliff, a plane, or car crash. While dying such a tragic death was not coveted, it did leave me with a feeling that it would allow me to go out as some type of hero. I heard fighter pilots (when I was in the Air Force) say that their dream was to die in a crater in the ground, when their plane went down, for the same reason. Then they would sip their beer through a broad smile. I never believed them.

As you mature, you stop seeing the glory in the spectacular deaths. You take less risks. By then you start to have some personal experience, were friends or relatives have died in terrible accidents. As a medical provider you have taken care of such cases (especially in doing earthquake relief as I have done). Then, through the process of empathy, you sense the real horrors of that kind of death. The overwhelming fear as the climax builds, and the horrible pain of being torn from limb to limb and then the slow ride into oblivion.

Sometime, by the time you reach your early “middle aged” years, you start to be far more realistic. Then you imagine living well into your nineties, while still in relatively good health. Then, at that ripe-old-age, one day you go for an evening run along the beach, come home to a spectacular meal, followed by a wonderful love-making session, and then going into a deep sleep . . . and never waking up. Maybe second to that, is dying suddenly during that run. My best friend, Bob, died suddenly while on a walk in Italy last summer. The only bad part was that he was only seventy. Dying while on a run or walk would, otherwise, be an okay way to go. If offered as a choice, I think most people will hope either of these options as their last day.

But most of us don’t think about it that much, not until you are forced to by some unfortunate life health event. Then, the old dusty topic is pulled up, polished, and put into the main of your mental stream like a giant boulder and eddy, which you can’t ignore any longer.

The topic came to the forefront of my mind once again this week. This was after some disappointments and after I had a very candid discussion with my Multiple Myeloma online support group about when to determine it is time to pull the plug on your own life. When I brought the topic up, I may have been hoping that they would all chime in how a terrible idea it is and we must fight on until death pries life itself out of our cold fingers. However, several in the group said they are at that place now and that it wasn’t a bad idea for me to start thinking about.

All of us in that support group have watched as other members suddenly enter this horrible final act. Their bones are all start breaking and the tumor is leaking into their brains, causing such excruciating pain that morphine is powerless to help them. That is our greatest fear.

There are other people with MM who survive years with relatively little suffering. Some have started like me, in a medical crisis, with renal failure and other problems, and over time their condition improves. It is for that I really hope.

(A Dying Fisherman in His Bed Being Consoled by Queen Victoria)

My common hope, however, has been disheartened over the past two weeks when I’ve had two very difficult responses to chemotherapy. My kidneys are not improving like I had hoped. The long list of bad symptoms, which is too long to mention again here, are not improving. I will say that there is no quality of life in this state and for that reason I started this conversation about death with dignity.

I’ve mention death with dignity with a couple of old friends, to which they replied that they don’t blame me. I was really hoping they would say “Don’t do it, there is so much to live for.” They didn’t. My wife and kids did, but not my friends.

No, I will not take any action at this time. I’ve promised my family that I would fight this cancer and the war is just in round one. If I were alone, it would be a different story. But I must have this conversation now and have it well-thought out, before that time comes . . . if it comes. I am not very brave and these internal conversations are not easy for me.

So, it comes back to that last day, what will it look like? If the disease doesn’t take me, I imagine that I will be with family, drink an elixir of poison and go to sleep, just to escape the incredible pain. That day terrifies me. Christians are taught not to say that, but it is true.

Dying frightens me because I loathe leaving this world and my family. I hate it with all of my being. I knew one day that it had to come for all of us . . . but not this soon. I fear some things in the process of dying, like pain or the feeling of suffocating. I came very close to drowning when I was twelve and was swimming off the coast of Cape Hatteras. I went under three times and had given up, when the suffocation propelled me to try once more. I never want to experience that again.

I think Christians have a pretend attitude toward death. When death is nowhere near, they are stoic. They say that they have so much faith that death brings no fear. 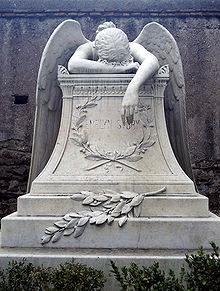 I remember one evangelical family, who wanted to prove to the world that they were such good Christians, had a huge party to celebrate their father’s sudden and tragic death at age 50. It was a “Going to Heaven” party. I went, with great reluctance, and felt it was bizarre; with a birthday cake, balloons, and candles filling their house. I think they were all evangelically-warped. Death is the pinnacle of evil in a fallen world and all death is a travesty. Death is not a point of celebration for anyone. Jesus saw his death as his darkest hour.

But do we go to Heaven? Most Christians, at least in the Bible-belt where I grew up, say that they believe that the moment you die you are suddenly transported to Heaven. Once there, you are met with streets of gold and everyone lives in a mansion and the ground is made of clouds. But, if you read the Bible carefully, it is confusing at best. There are places that “going to Heaven” is suggested. But there are other places that an immediate transportation to a new, physical earth (thief on the cross) garden is suggested. Then there are places where it is implied that you lie in the ground (or as spread ashes) until the end of time and then you are raised to some glorious place . . . or to remain on this earth, but a renewed earth.

In the Bible belt, I think the expected, intoxicating images of Heaven during the dying process, is more like Timothy Leary’s LSD popping journey on his deathbed–an act of denial–rather than an act of great faith.

So, there is ambiguity for the Christian about what happens after death (although many of them would angrily deny that ambiguity). This kind of uncertainty only breeds more death-anxiety. I favor the idea of an immediate transportation into a new, healthy body, in a new and healthy earth.

For the atheist, the post-death experience is certain. As your brain shuts down, you disappear, and your physical body turns to compost. Story over.

There are other belief systems which have types of reincarnation as the post-death experience. Most of them suggest that your memory of this life is erased (so that it will not interfere with the new life). But in that case, is it really you?

I do have great fears about dying. I fear more the suffering. I fear the boundary-less sadness about leaving my family and this world. That fear is so horrible, that I pray that my death comes sudden and unannounced. It is a paradox that while I have an insatiable desire to live, I also have a desire to end life myself before life reaches an  unsustainable place of suffering.

I wish I were a hero, I am not. I think of a hero as a knight willingly going off to a war of certain slaughter for a great cause. Even my own dad waded onto the beaches of Normandy with high probability of a horrible death. Maybe he didn’t have a choice, but still it took a tremendous amount of courage.

I wish beyond what the imagination can hold that I had not been given the fate of this disease. It is truly awful. I hope for that narrow path of survival, where the suffering decreases over time, where the kidneys come back, where the chemo suppresses the cancer, where I’m a candidate for a stem-cell transplant, that the transplant works to give me up to 10-cancer-free (not really free but close) years and then by then, a cure has been found. That is my hope of the narrow path, so narrowly-gauged, that it borderlines on the miraculous. Mike